With less than seven months before the opening bounce of the 2018 season, creating a football team from scratch to play in Australia’s second tier elite competition sounds like a daunting task to even the most ambitious sport administrators.

But that’s exactly what was accomplished at the Williamstown Seagulls Football Club with the rapid establishment of the club’s first women’s team for the VFLW in 2018.

The ‘She-Gulls’ were put together from a standing start. With new players, coaches and support staff quickly coming together to add a new chapter to the club’s fabled 155-year history.

“Watching that team run onto the field for the first time was probably one of the best moments of my life,” said Michelle Redfern, Board Director at Williamstown and Chair of the women’s team subcommittee.

In 2015, the club formed a 2016-2020 strategy with a goal of expanding on-field operations to a female team. As part of a board renewal process, the club set about targeted committee recruitment leading to Michelle’s involvement.

With confirmation of their VFLW licence coming in October 2017, Williamstown were given a short time-frame if they wanted to fill a team for the following season, but with a concerted effort and a dogged passion, 22 teammates successfully ran out onto the ground in time for round 1 in May 2018.

“Time wasn’t our friend but luckily we had a lot of us who just worked really, really hard to get this done and make it happen. It has been really rewarding but it’s also been very challenging.”

Joining the VFLW, a reconfiguration of the already established Victorian Women’s Football League, Williamstown faces the challenge of being a stand-alone second-tier football club. Alongside the Darebin Falcons and the Northern Territory Thunder, Williamstown are one of only three VFLW clubs to operate independently or without affiliation with an AFL club in the 13-team competition. 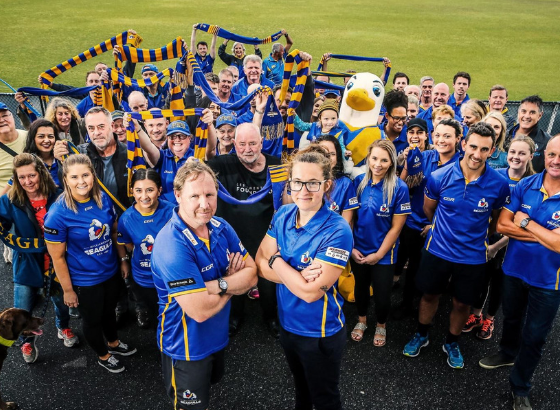 Another challenge the club faces is one that is being felt across the state as community sport clubs cope with the great surge in female participation: a lack of funding and appropriate facilities. But with the help of the Victorian government that issue is being addressed.

“When you are bringing a new cohort, a lot of the systems in place and facilities aren’t set-up, so we need to be vigilant and constantly remind ourselves that we make room for, or expand our way of thinking as we welcome women into our environment,” said Redfern, who runs her own advisory practice ‘Advancing Women in Business and Sport’.

“We’re very fortunate that we’ve had our local MP Wade Noonan be extraordinarily supportive in helping us navigate different opportunities for funding, as well as John Eren (Minister for Sport) and Bridie O’Donnell (Head – Office for Women in Sport and Recreation) and throughout the Sport and Recreation Victoria. The resources available to us out of the state government have been second-to-none. They have advice about everything from governance, how to build female friendly facilities, culture and processes.”

The club is now working on a precinct rebuild to cater for both men and women’s football, as well as a grander plan to create a space for the public to enjoy with amenities such as a gym and café.

Redfern was recently named by the Australian Financial Review as one of 100 women of influence and announced as a finalist in Essendon Women’s Network’s 2018 Football Woman of the Year Awards for her work in promoting gender equality in sport. She says that it was important that this team wasn’t just created to be compliant or as part of a ‘tick-the-box’ exercise, but it was a meaningful and lasting development.

“Creating a women’s team is absolutely a core part of the long-term strategy for the Williamstown Football Club. This is a part of changing our complete structure internally and externally for our members, our community and our stakeholders.”

“I’m really pleased because we now have a board that is really well skill balanced and gender balanced, and we have a really good long-term strategy in place.” Redfern’s message to other clubs that have yet to establish women’s teams is that the goal is achievable and very worthwhile.

“It’s absolutely worth doing, you’d be mad not to. There are many considerations, like resourcing, funding and the appetite needs to be there, but you’re going to be left behind as a footy club if you aren’t on this bandwagon in the next few years.”

“We are getting new families, supporters and new interest about the club which is really important. From an aspirational perspective, to now have little boys and girls see their role models running around and knowing that it doesn’t matter if you are a boy or girl, that they’ll be able to play for Williamstown one day is just fantastic.”

“The sport is now gender-less and kids can come to Williamstown or any other football environment in Victoria and say;‘Yeah I can do that, I can play’, which is just very very cool.”

In what is a classic illustration of the ascent of women’s sport in Victoria, the ‘She-Gulls’, have launched themselves as a permanent addition to Williamstown Football Club’s operations. And whilst it’s still very early days in women’s team’s lifecycle, the determination and vision of the club will no doubt see the Seagulls soar into the future.