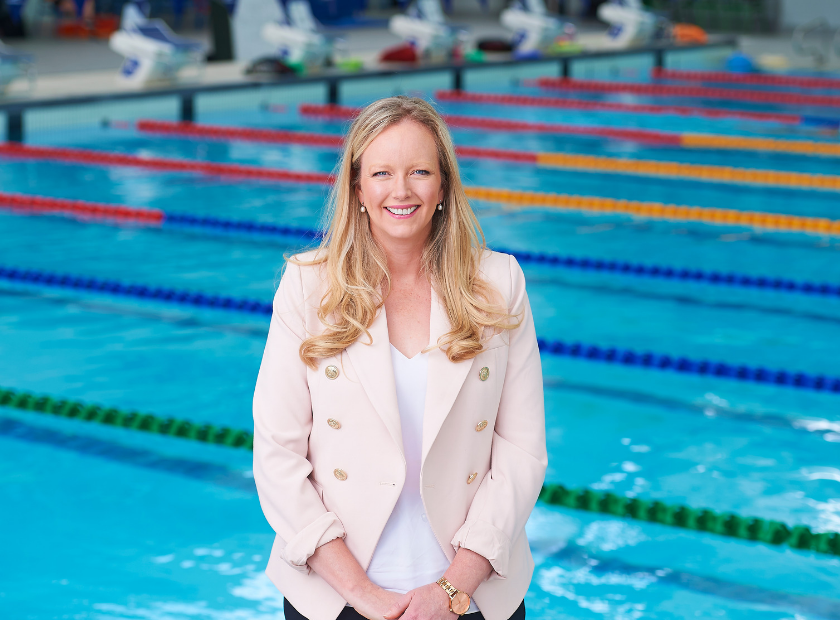 With her feet under the desk at Swimming Australia for a year this April, Russell continues to draw on the connections and learnings from the key mentors and influencers that she has gained knowledge from during her impressive sports administration career in netball and the AFL.

“Linda has always shown strong leadership and vision with good grace and humor, who has always made time for people around her, ensuring she 'took others with her',” Leigh says.

“And Peggy has a razor-sharp focus on what outstanding governance and leadership is and has enough patience and humility to stay on the course and achieve it.”

Leigh’s own career spans 17 years having worked across a range of influential managerial positions as the CEO of Netball Victoria and Melbourne Vixens along with people, culture and leadership roles at the Essendon and Gold Coast Suns football clubs.

A passionate proponent of women and girls participating in sport at all levels, Russell has also lived the ‘you can’t be what you can’t see’ ethos through her own projects such as the books ‘Every Girl Needs a Plan’ and ‘Game On’ and the online leadership program for women ‘The Ignition Project’ all co-authored with former Australian netballer Bianca Chatfield. Leigh’s no-nonsense approach and ‘tell it like it is’ philosophy has allowed her to break down glass ceilings and prosper within the sporting industry. Despite her success, she has experienced many road blocks and challenges.

“The very traditional notion of what a leader 'looks' like has been an interesting one to navigate,” Leigh admits.

“The biggest one is the double bind - too tough and you are a bitch, too gentle and you don't have what it takes to make it.”

As CEO of a high-profile national sporting organisation that has a long and celebrated history of successful women in the sport, dating back to 1912 when swimmers Fanny Durack and Whilemina Wylie became the first Australian women to win Olympic medals at the Games in Stockholm, Russell still feels the challenges for women remain, particularly outside the pool.

“I want to never hear the sentence 'but we can't find a woman for our (board/team/committee) they are just not out there' again in sport.”

“If the Change our Game campaign can make visible the enormous contribution that women are already making to this industry and shine a light on unconscious bias that threatens to hold our industry back, then that would be a game changer.”

Leigh has the following advice to young women beginning or thinking of getting involved in the administration of sport, whether it be as a volunteer or as a career.

“It helps to not be too caught up in job titles, position descriptions, or get too entitled. And definitely don't look over your shoulder and wonder when you are going to be caught as an impostor, but equally, learn to take feedback and see failure as a data set you can use to be successful.”

“Enjoy being part of an industry that has an impact on people's lives and the world we live in.”