The Geelong Cats general manager of community has a career reflective of her passion for people at a club she loves.

Her latest initiative, making GMHBA Stadium a sensory inclusive sporting venue, a first for the AFL, is just one of a long list of achievements.

“We’re heading into my 15th season, we talk in seasons not years,” Sarah says when asked to reflect on her time at the Cats.

“I was always interested in sport, my mum and dad played a lot of sport, my dad played 300 games of local footy.

“I played state league netball for 14 years and I got into sport science at uni in Ballarat.”

However, on the cusp of moving to Ballarat, the Linton bushfires ignited, changing everything.

Sarah and Matthew were the same age, 17.

“Matthew’s tragic death for me was a sliding doors moment,” Sarah says.

“When he died there was a lot of media coverage around his death, I became the unofficial spokesperson for the family.

“Brian Naylor approached me after the funeral and asked me if I would consider a career in public relations.

“His death changed the direction of my life.” Spurred on by the television broadcaster’s advice, Sarah enrolled in a public relations degree at Deakin University.

She was keen to work at the Geelong Cats, so approached the club for work experience.

“I was knocked back seven times,” she says.

“I finally got onto the HR manager who said I could have five minutes so I went in and gave it everything I had. The events manager came in and said to the HR manager, ‘I have so much on’, and so they said, ‘call this girl’.”

Sarah volunteered for six months in 2001, before getting a full time position.

“I look back at 19-year-old me and I was resilient – I had faith something would open up,” she says. 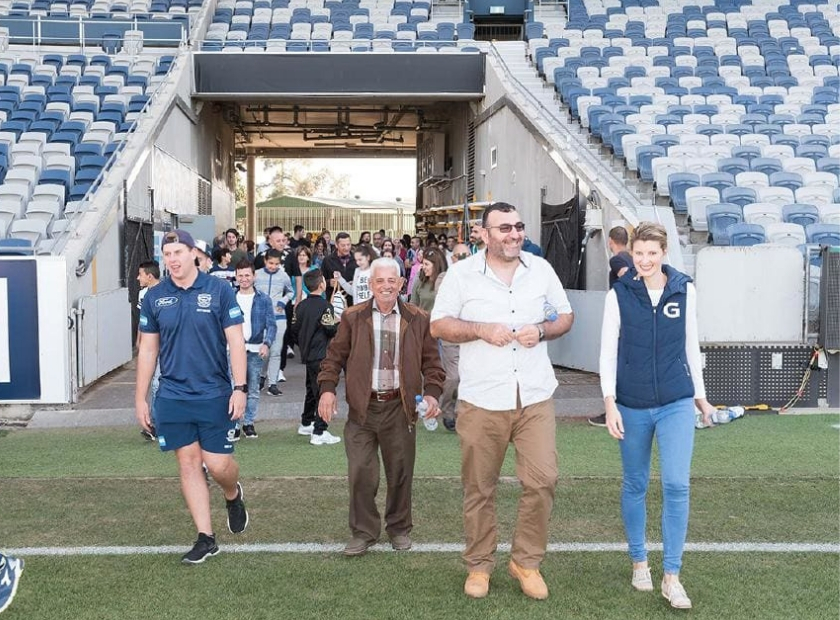 Sarah spent three years in events before moving in the PR and media department.

There are almost too many special moments to name during this time.

“We broke the 44-year drought in 2007, which was an adrenaline rush for about a month,” she says.

“I had a great leader, Brian Cook, the best sport administrator in the country. The highlight for me was the 2006 club culture review, being a part of that transition, Brian led it wonderfully.”

One brilliant idea that has resonated with people, in particular children, across the country, is the ritual of the AFL premiership players handing over their premiership caps to the Auskicker presenting their medal.

“We won the NAB Cup in 2006, one of our players got caught up in the moment and when he received his medal from the child he forgot to shake their hand,” Sarah remembers.

“I thought, ‘what if there could be transaction, a mutual gift?’. The idea to give the kids a cap was born.

“The AFL said no at first, but eventually said yes, and it still happens now.”

In a happy coincidence, Geelong won the 2007 grand final, and so were the first club to gift their premiership caps to the Auskick children.

A mother of three boys, Will, 6, Xavier, 4, and Tommy, 3, Sarah understands now more than ever the importance of this moment. “My oldest does Auskick so I can see it through his eyes.” Sarah Albon with sons, Tommy, Will and Xavier.

During her career Sarah spent some time away from Geelong, working for the International Cricket Association and English cricket team. She also travelled abroad in her role with the Geelong Cats, most recently receiving a Harvard University scholarship in the United States to learn about strategic planning in not-for-profits and leadership management in the sector.

Sarah has been the general manager of community at the Cats for the past seven years, as long as the role has been in existence.

“I was able to create the program from the ground up,” she says.

The department has a strong focus on youth, with about 40,000 young people going through programs run by the Cats each year.

“One of the best moments was in the Djilang Program,” Sarah says.

“A young girl came into the program and had never connected with her culture. We launched the indigenous garden and she stood in front of 100 people and announced herself as a proud Aboriginal woman.”

Sarah also stepped in to the acting chief executive role while Brian Cook was away in 2018. She is the youngest executive on the team and one of two women. She was also the first executive in the AFL to work part-time.

“When I told Brian I was pregnant he was ecstatic for me,” she remembers.

“To have the opportunity to have flexible hours was amazing, to find that elusive balance.

“I hope it opens the door for others, I want to show flexible work arrangements can be viable.”

A project Sarah is finalising is revolutionary for the league, making the stadium sensory-friendly.

“But our community programs talk to our club values – our players are role models.

“Last year a father wrote to us about his son, about how he held him for the first time, and imagined going to the football together. He was later diagnosed with ASD (autism spectrum disorder), football was not practical for his son.”

Autism prevalence rates are one in 70 people, according to Autism Spectrum Australia. The Geelong Cats has partnered with KultureCity, a United States organisation dedicated to assisting families and children with special needs to feel included in society.

The initiative will involve inclusive spaces that provide universal accessibility for any person with a sensory issue, as well as their families, so they can enjoy a game of AFL. The program has consulted with National Disability Insurance Agency, Gateways Support Services, BCYF, Leisure Networks, Deakin University, Latrobe Community Health, Kardinia Park Stadium Trust, City of Greater Geelong, G21, Geelong Paediatric Group, Diversitat and Armstrong Creek School. About 550 match-day staff are receiving training for the program.

Match attendees will have access to a support backpack with weighted lap mats, noise cancellation headphones and fidget devices, as well as emotion cards and a map to show sensory designated area.

The multi-sensory room is a dedicated location during any event for guests to access for ability to decompress and remove themselves from sensory overload. The week before the match there is also an orientation for children and families to practice walking through the gates, finding their seats and familiarising themselves for game day.

The sensory area is available during all community programs and major events.

“This might be the first time a family has the opportunity to do something together. That inclusive power of football, creating a sense of community, this might be a game changer.”

The sensory-friendly initiative will be up and running for the Cats first home game. Sarah is excited to be working on making the Cats an even more inclusive place, especially ensuring the VFLW and AFLW players feel like they are a part of the club and its history.

With Geelong Cats set to celebrate its 160-year milestone this year, Sarah is again going to be a part of history, which she relishes.

Another moment she will put her stamp on.